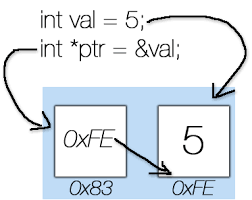 Pointer variables are a feature of systems programming languages, such as C++ or C, that are able to store the memory addresses of other variables and objects used by the program. Knowing the address of an object can very convenient. You can freely pass it around into functions, if the function needs to operate on that object.

On the other hand, its address, 695 Park Ave, New York, NY 10065, is much smaller than the building itself, you can write it down on a piece of paper to pass it around to other people or to keep it in your notes without taking much space.

So, a pointer variable is pretty much like this piece of paper with the address. It takes a little bit of memory (several bytes, the exact number can vary depending on your system and the type of pointer), and lets you refer to other (potentially much bigger) objects.

Action of these operators in the Hunter campus analogy:

Task A. Length and distance in 3D space

A point in 3D space can be represented using three coordinates. In Cartesian coordinate system these coordinates are called (x,y,z), describing the position of the point along the three orthogonal axes: 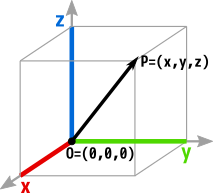 The origin of the coordinate system is denoted by O and has coordinates (0,0,0).

A point P=(x,y,z), together with the origin, defines a 3D vector OP. The distance from O to P, or in other words, the length of the vector OP can be computed using the euclidean distance formula:

We are provided with a class type that represents coordinates in 3D:

Write a program 3d-space.cpp, in which you define a function length() that receives the coordinates of a point P passed as a pointer, and computes the distance from the origin to the point P:

Notice that we pass the memory address &pointP, where the object of this class is located. The function should dereference this address to get the corresponding fields x, y, and z for computing the length.

Task B. Farther from the origin?

In the same file 3d-space.cpp, add a function

Which receives the coordinates of two points (passed as pointers), and returns the pointer of the point that is farther away from the origin.

When testing your code, look at the reported address of the answer ans and determine whether it reports P or Q. You can use a calculator or WolframAlpha) to check the numbers. Try other coordinates of points P and Q to confirm that the program works.

Let’s consider an object moving in 3D space. We already know how to describe its position. (We will be assuming metric system, thus distances will be implicitly measured in meters and time in seconds.)

The object’s velocity can be represented in the same 3D coordinate system as its displacement per second in the coordinates x, y, and z:

When moving at constant velocity vel , the object’s new position after the elapsed time dt can be computed as

Let’s implement it. In the same program, write a function

which gets the position and the velocity of an object and has to compute object’s new coordinates after the time interval dt. The function does not return any values, instead, it should update the object’s position ppos with its new position coordinates.

Because we pass the coordinates Coord3D * ppos as a pointer, all changes to the fields of the class pointed by ppos, will affect the original object you pass into the function, not its local copy. Example:

Notice that we are not passing anything by reference: We pass the address, &pos, and the function manipulates the original object pos, because it knows its address in the memory.

Normally, any variable “lives” only within the block where it is declared, and disappears once the program execution leaves this scope. We know that already, right?

This memory management is called automatic, the program allocates memory for each variable when it enters the scope of the variable, and deletes that memory when leaving that scope.

A problem with automatic memory allocation:

The following function that’s supposed to create a poem and return its memory address, will not work (reliably):

Since the variable poem exists only locally inside the function, after exiting the function, the memory allocated for this string gets claimed and freed by the program. Even though we returned the address where the poem was, after the function exits, that address may be taken and used by some other part of your program, the poem may be easily overwritten by some other value.

Question(?):
Can we allocate a chunk of memory for the poem so that it would remain persistent and would not be claimed by the program after the function exits?

Yes we can, using the keyword new:

The address of a dynamically allocated memory can be passed around, returned from a function, or stored in another variable, etc.

The dynamically allocated memory will remain persistently in the computer memory throughout the program execution:

Dynamically allocated memory is awesome, it stays persistently and does not depend on the variables and their life times. However, it also comes with problems: Once this memory is not needed, it must be manually released to the system, otherwise if we only keep allocating memory and never giving it back, we may run out of memory eventually.

When we know that we don’t need a dynamically allocated memory anymore, we have to delete it with keyword delete:

Dynamic memory allocation of arrays uses special operators with square brackets, we have to specify how many elements we want to get:

When it is not needed, use operator delete[] to release the memory.

Task D. Fix the program so that it does not crash your computer:

You are provided with the following program poem.cpp. All is good, and the memory is allocated dynamically, but it crashes your computer, because it runs out of memory really quickly:

Fix this program poem.cpp. It should still keep creating poems, but all dynamically allocated memory should get deleted when it is not needed. (The program can be stopped with Ctrl+C in the terminal.)

In the program 3d-space.cpp, add functions that create, delete, and coordinate objects dynamically: 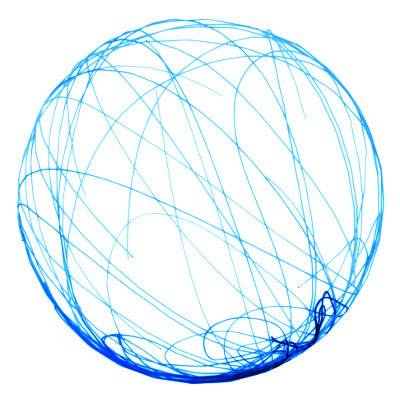 Write a new program particle.cpp (you may copy anything you want from 3d-space.cpp if need be).

The program should declare a new class Particle, which

Implement these five functions. deleteParticle must delete all dynamically allocated memory that is created by createParticle function.

Here is a usage example of the class and its programming interface. It models accelerated motion of a particle, which is done by making the velocity of the particle increase on each time step.

How to submit your programs

Each program should be submitted through Gradescope

Write separate programs for each part of the assignment.
Submit only the source code (.cpp) files, not the compiled executables.
Each program should start with a comment that contains your name and a short program description, for example: